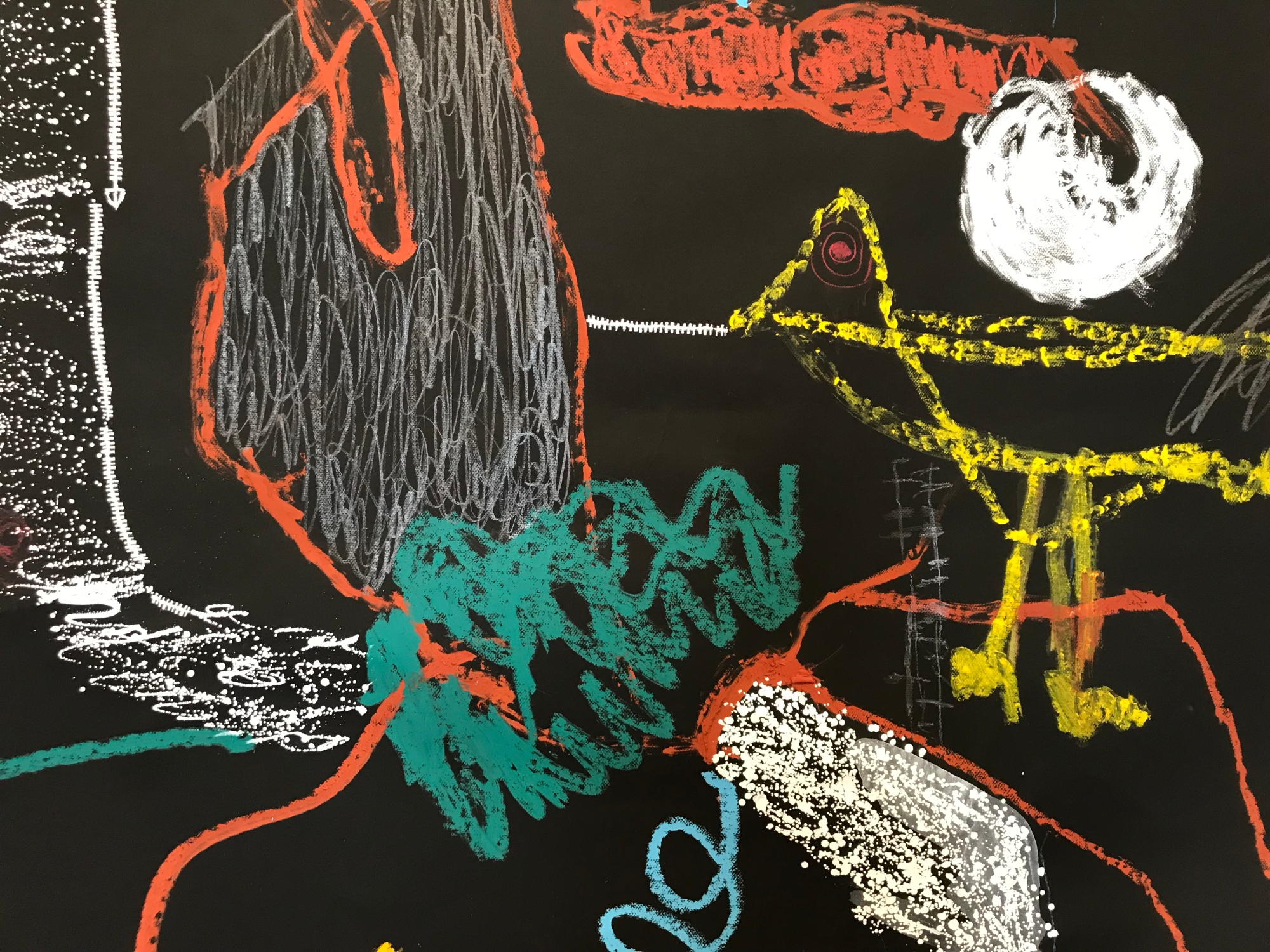 Unique in their appearance, unique in their meaning, these drawings call for more than a mere glance. Benin born Thierry Oussou exposes his vision of the world through his art. He tackles themes such as borders, heritage, rights, and culture.
Oussou is at the heart of a controversial installation currently taking place at the Berlin Biennale, an event running in parallel with his current work on display at Tiwani Contemporary in London.

Black sheets of paper loosely pinned to the walls, raw and reminiscent of a child’s drawing. The multitude of floating shapes are enhanced with a basic palette. An Identifiable beige face contrasting the black background appears recurrently throughout the exhibition. This character is surrounded by forms which, knowing Oussou’s underlying quest to communicate through his work, can either be interpreted as a meandering train track, houses for homes, and open ended spirals as a never-ending journey.
Nothing expresses clearly where the events are taking place, nor whom this character could be. Perhaps it is Oussou himself representing the thousands of individuals wandering for their rights to be honoured, or for frontiers to be easily crossed.

The drawings are the symbol of his first encounter with art. As a child, he came across the set-up of an exhibition in his home town. Attracted by the liveliness of the drawings he saw, his desire to touch and seemingly feel the surfaces eventually lead him to meet the artist, Edwige Aplogan, whom years later would judge some of his pieces during a contest. Since then, his work has taken the form of a communication means. Behind the minimal aspect of his drawings hides profound meaning exposing the system of his country and rebelling obediently against injustices.
His recent creation Impossible is Nothing at the Berlin Biennale follows this process. The multimedia installation represents the 19th century throne of King Béhanzin, the last ruler of Dahomey (today’s Benin) under French wardship since the kingdom’s colonisation. According to Louis-Georges Tin, president of French Cran (Conseil représentatif des associations noires), delivering his opinion in the French newspaper Liberation: “These cultural goods have a history which cannot be understood except in the context of Benin”.

The purpose of Oussou’s oeuvre is amplified in the context of his creation. The pieces composing his drawings act as a symbol for the bigger picture. How one views a country and its heritage and traditions is an important part of his undertaking. Grasping and appreciating international culture requires literally having access to different countries and therefore crossing borders freely.
Now a resident for five years at Rijksakademie van beeldende kunsten in Amsterdam, he demonstrates the need to travel to expand one’s horizon. Some cultures cannot be understood except by living and being immersed in their respective countries.

Without having any political opinion but rather addressing solely the nature of the location and its legacy, and reflecting back on my visit to Tiwani, I wonder how much of Oussou’s drawings I really acknowledged? If I had visited the Musée du Quai Branly in Paris where the original pieces from the throne are displayed, what would have I taken away?
It seems like collections presented in renowned institutions are biased by their location. If they are exhibited in their countries of origin, their effects on the history and culture they represent is amplified yet when they are taken away and seen from a foreign perspective, they contrast and shine, celebrating a time period while consecrating a population at a much higher level. Oussou’s intentions highlight a valid and fair point. His artwork enforces a pursuit greater than the pieces themselves.