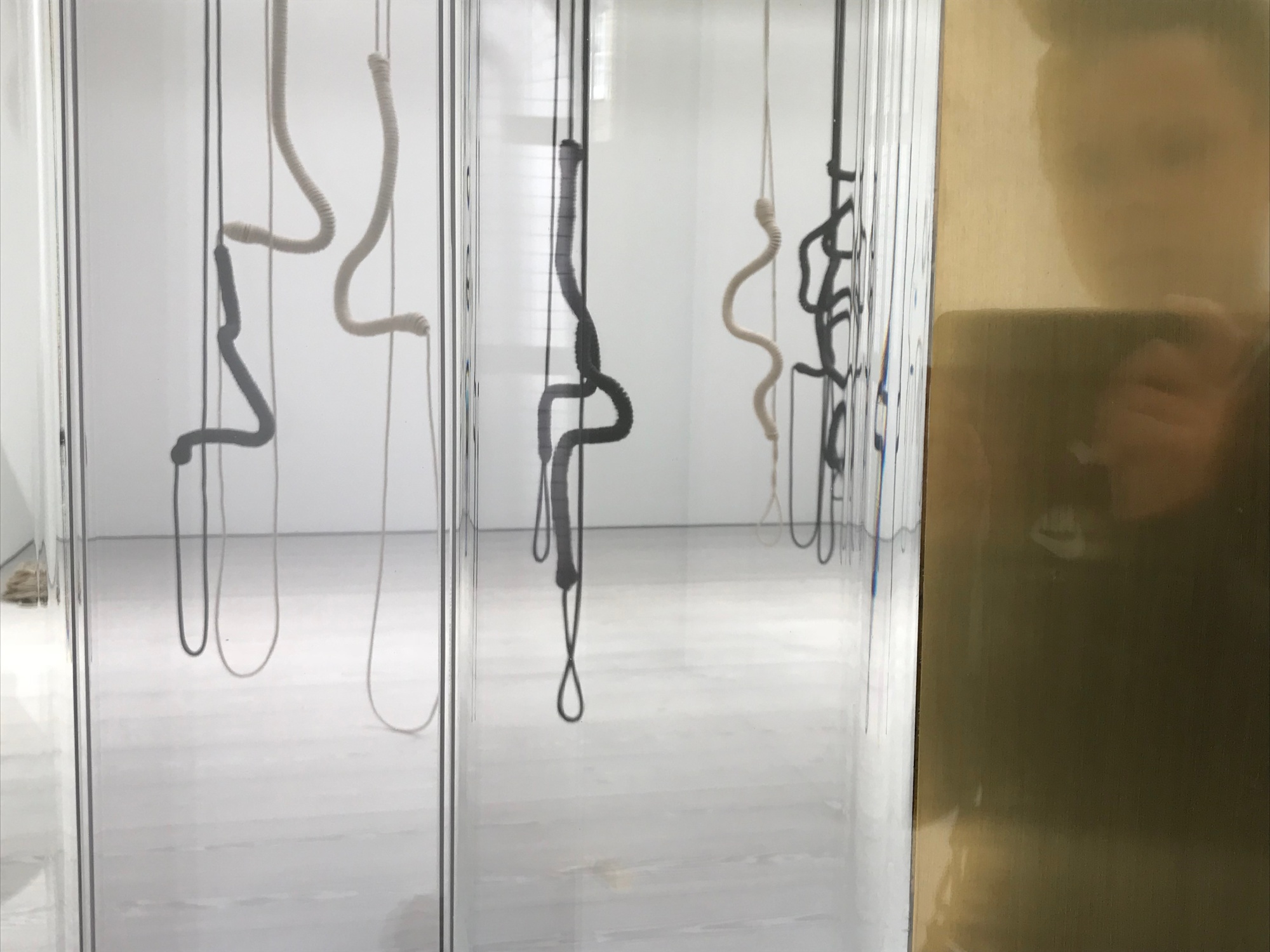 The works of Leonor Antunes stand out by their presence and their implication with space. The proximity of architectural and sculptural elements creates a visually intricate pattern. The Marian Goodman gallery in London is the premise of Antunes’ installation where the piece has been produced in situ. This process highlights the characteristics of the rooms and guides the viewer into a labyrinth of contemplation.

The creations of Antunes blend linear and geometrical forms hanging from the ceiling and reaching the floor. Whether it is a light, an intricate detailed piece of leather or nylon, or mosaic patterned panels where the play between angular and rounded shapes coexist brightly and intuitively. Lighting from the bulbs appease the dialogue between two opposing languages and intonations created by rectangular panels responding to suspended ropes.
From wherever one stands, the installation can be perceived differently. Where I previously feared a group of hanging black undulating and desolated ropes, if I change my stance, I now observe poetry in the association of cords, shining light, and rectangular tiles.

This ground floor is dedicated to Antunes’ re-enactment of the interpretation of both Mary Martin and Anni Albers past works from which the artist borrowed the structure for her own patterns. The exhibition, references artists and although this method can be perceived as common and intuitive to artists in general, Antunes seemingly takes pride in mentioning the source of her influences. The rendering creates a connection between craftswomen who have never met but whose work essence share the same space.
The pattern on the screens and the colour palette of rich greens, ochre, burgundy and black contrast with the simplicity of the leather surface.

The corridor leading to the first floor is interspersed with whittling ropes, knots and lights. The bright luminous upper gallery shelters a different type of panel, this time originating from the Upper Lawn Pavilion in Wiltshire.
Built by Alison and Peter Smithson in South West England as their weekend home, the house alternated rectangular glass and opaque panels. The lights from downstairs have been removed on this floor, exposing dangling threads of nylon and hemp coupled with vertical golden and translucent rectangles.
Each time I tilt my head, I acquire a new perspective of the work. The colours are subtle and only the black imposes its personality to the ensemble of coils and undulations. Although the shapes and layout appear similar to the previous ones, the overall effect is unique and more soothing.

Immersed in a pool of light, my perception is one of submission. Surrounded by ropes and partition screens, this scene imposes a sense of simplicity. The placement of the shapes, and the use of colours and material contribute to the openness of the landscape.
At first, I was intimidated by the knotted ropes, darker panel tones and purposefully built cork floor. These elements prevented me from glancing into the actual space, feeling trapped in an uncomfortable perimeter as I looked around.
What changed from one floor to the other? In which manner has the shift of material and physical details transformed this last structure into something more bearable?
Antunes’ intentions, without imposing a particular type of meaning to her installation, suggests that the viewers take notice of the tangible alterations engendering subtle adjustments in themselves. The beauty of her work imperceptibly affects our feelings but also resides in the togetherness brought by the collaborative phenomenon of various artists of her choice. Familiarity is at the heart of her creation. A precious feature inexplicable in the overall context of each element in this exhibition but straight forward in its recognition within oneself.

A thousand realities from an original mark: Leonor Antunes at Marian Goodman gallery London (24 May to 20 July 2018)