Plants sprawl  across  the ground  and contrast the reflecting light against  the glossy floor and bright white wall of the Helsinki Contemporary gallery.
Swedish artist Roland Persson has set up an uncanny presentation of his latest silicone sculptures casted on real plants.
The final composition is both poetic and morbid, the sculptor blending the two as a celebration, as stated in the press release, of ‘growth and decay’.

Upon entering the gallery, two visual directions  are offered.
On the right, a bathtub lays on its side with overspilling water lilies , which gradually take over the entire surface of the large main room while two sketched drawings hang silently in the background.
The second visual route points directly  ahead with two cactuses rooted to  a wooden table. Thick lianas rope around, spiralling down the table legs while thinning as the extremities find their way into opaque glasses set on the floor, filled with liquids. Two drawings are also hung in the background here but the traits are too fine to be interpreted from afar.
Another sculpture rests  on the floor in a secluded part of the gallery. Dried out and flakey flowers, fade next to water lilies against cardboard cartons and bubble wrap.

The notion of degeneration is substantially present throughout Persson’s work. Where does the choice of nature stem from? It apparently reflects some of the primal characteristics of human nature.
Like us, nature is being born and it will die. Like us, it needs to be fed. Like us, it is sensitive to its environment.
Waterlilies crawl away from an overthrown bath and cactuses’ only chance at surviving is by painfully absorbing the last drops of nourishing values from an artificial set-up of glasses filled with dubious liquids. 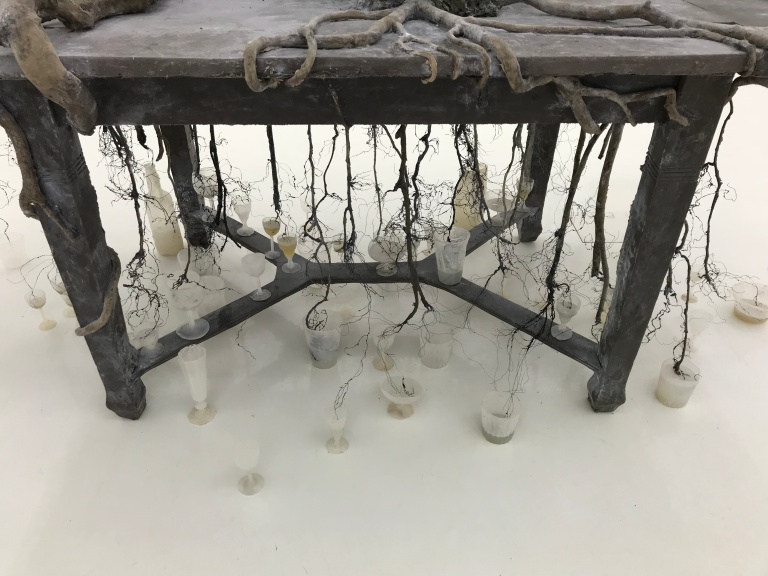 Persson’s attempt to fabricate real plants, translates his intentions to describe the existing relationship between humankind  and society. Some of the subjects he is tackling such as emotions, fear, and death are explicit enough to grasp. Others he mentions in the interview conducted by writer, curator, and art critic Mika Hannula such as politics and sexuality, are in my opinion, less obvious.
Persson’s dystopian reality is presented harmoniously in a subtle pastel colour setting, where natural elements are mixed with human-built pieces such as  bathtubs, bubble wrap, a table, and glasses. The sentiment of compassion towards these elements overcome any other feeling one might possess. Is this how Persson perceives human kind? Plunged into disillusion and disarray, drowned in its own superficial creations, attempting to escape but ultimately trapped in a vicious circle.

The title Flora & Fauna (and some drawings, too) suggests that the drawings are secondary, which is the opposite of what the artist states in the interview previously mentioned. They play a dual role next to the sculptures elaborating their meaning and forming their “pictorial narrative”.
Drawn on something similar to wax paper, they appear discreet yet seem to reveal a great deal regarding  the underlying thoughts at the origin of the process borrowed from Joseph Beuys’ original drawings.
Persson believes that duplicating nature has more impact on viewers than the original pieces. Perhaps this is due to the fact that we, as individuals, are less afraid to look at things from someone else’s point of view. In some way, the images are humanly distilled as opposed to brutally imposed.
We like reality cushioned and filtered. Not too much but just enough for us to believe that we are the authors of external perceptions. If we look around, how many eyes have laid on images, landscapes, and scenes before it reaches us?