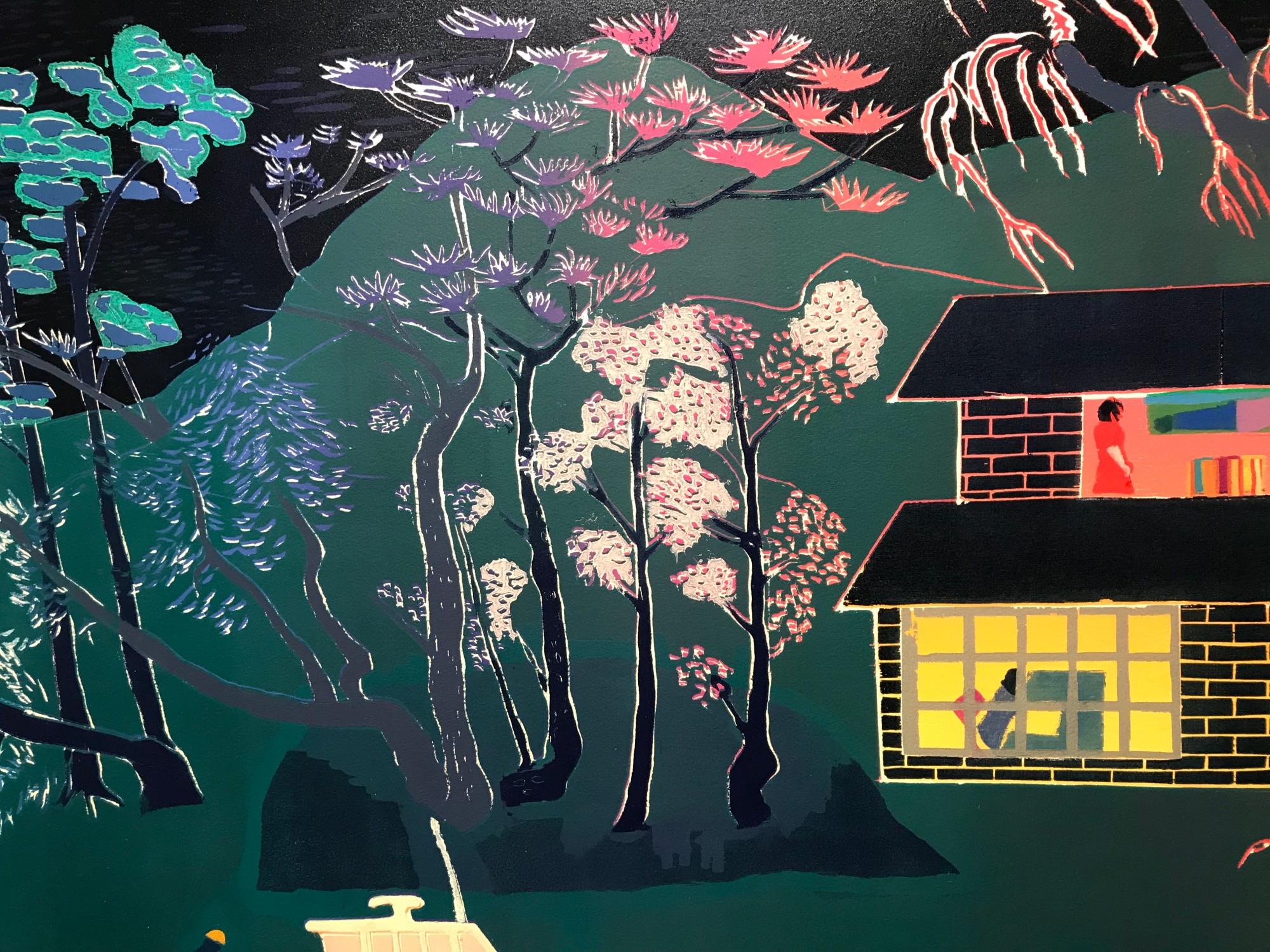 A recollection of a trip in space. British artist Tom Hammick has filled the Flowers gallery second floor with woodcut prints all sharing midnight blue landscapes.
If that sounds poetic and dream-like, they take their inspiration from emblematic movie scenes, hence the artist’s fascination with Stanley Kubrick and Andrei Tarkovsky, reflected both in his paintings and prints.
He entertains a diametrically opposed schedule to the logic of his work. By nature, he is a night owl but only works on his prints during daylight, when in London, with his team. He therefore paints late at night and until the break of dawn, passes the remainder of the week in East Sussex.
For this series, he looks back on images envisioned from his past, kept secret in his sketchbooks. He blends these with Sci-Fi movie scenes watched as a child, producing unique and intriguing visuals.
Together with Hammick, we are invited to wander in space and return with new perspectives on what it feels like to be away from home.

Hammick has plunged his wooden frames into a poetic dark blue setting as a metaphor to express his exploration of a spiritual path. The colour also represents the immensity of space as well as the unknown. What is at the heart of the artist’s quest? From the forefront, this seems like a random voyage into a fantasy world where pastel colours and rounded shapes interact harmoniously. Contrasts and fine details draw the eyes as it creates a soft glowing light which brightens the night just as a nearby satellite would.
Some prints juxtapose different images. In Sleeper, a man lays on the floor surrounded by several bubbles, as if his thoughts and dreams were being painted as he simultaneously drifts into space. The opaque sky disorients perceptions, also symbolising the night where imaginative visions materialise in front of our eyes without necessarily becoming real.
This back and forth pattern between reality and dream, truth and imagination, is predominant in Hammick’s work.
The canvases are also inhabited with human dwellers’ shadows, shapes, and silhouettes. Their faces, the only part untraced, while their body language translates their emotional state perfectly. The colours and patterns make it seems as if they have been extracted from the 70’s. The print method seems to be at the origin of the underlying childlike compositions, remnant of a collage. The images take the appearance of a cartoon, simplistic yet charged with existential interrogations and self-introspections.

It is tempting to think of the representation of space as escapism from Earth and in the vast vacuum, human beings are probably meaningless. Is Hammick searching for that feeling? That which isolates ourselves from others, allowing to feel at peace and freed from human constraints.
In the interview he conducted, he claims this is not the case. He has represented the Earth in the same perspective as the moon, on purpose. The aim is certainly not to dismiss its importance over the mystery of unknown spatial spheres but rather to note how much he would miss home. Home as the Earth, home as his loved ones, and home perhaps as himself. If we were to run away from ourselves, would we miss this deep connection with who we really are?