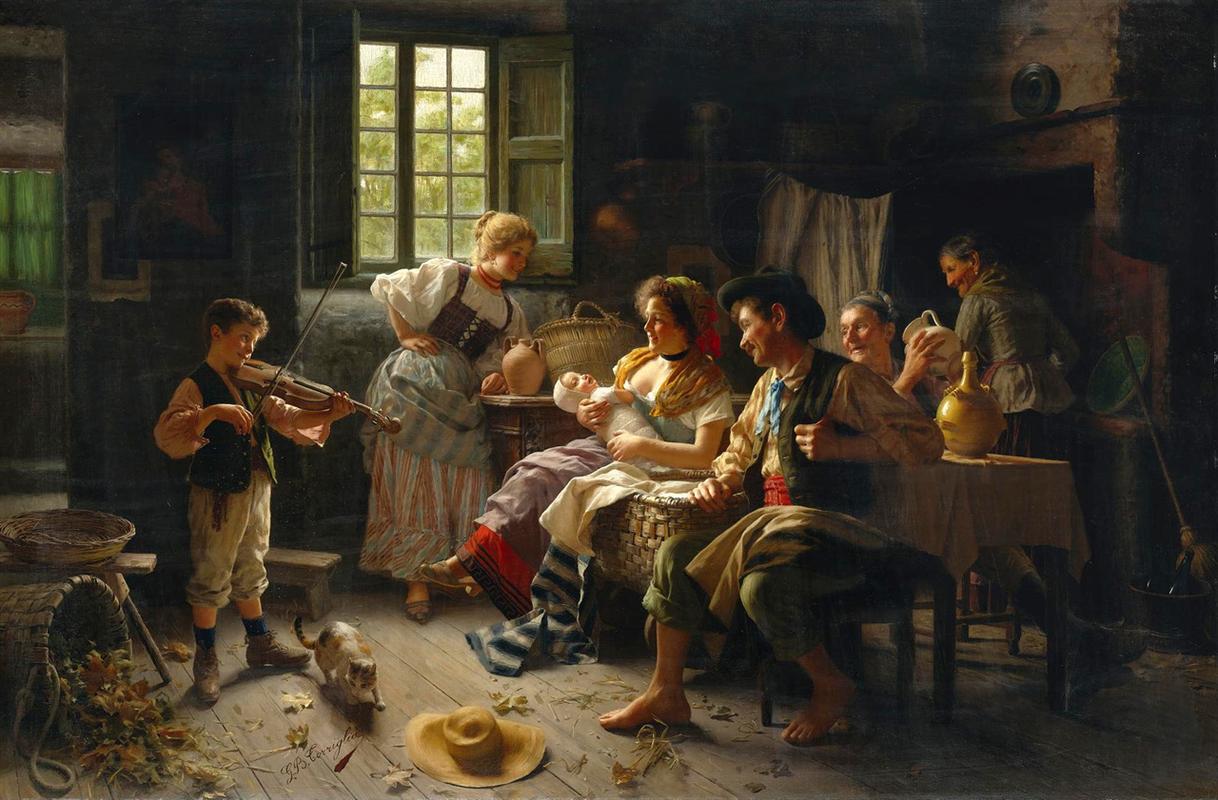 When they gathered on a bright Saturday afternoon, celebrating the arrival of the newborn Claude a week earlier, Hubert took his violin out from his case and started enchanting his family with a delightful melody.
“This is for my baby brother!” he exclaimed, leading cheers and laughter.

His mother held Claude tight in her arms. His father came out from the bedroom, barefoot, where he was enjoying his midday slumber. Margot, the older sister decided on this occasion to take a break from her chores and leaning on the side table against the window, smiled with pride and admiration for her little brother.

Nina and Carmelita, two older friends now living under the same roof as the Hucklebares continued their tasks but nonetheless paid great attention to the little fellow proudly playing for the crowd. Even Rabada the wandering cat, attracted by the enthusiasm of the melody, decided to join in and wander some more.

Hubert is a talented boy, obedient and polite, who enjoys learning from his hard grafting  parents. He has seen his mother crying and his father worrying but has always been taught to appreciate simple things in life when everything collapses and nothing is in his favour.
The kitchen table is often burdened  with jars and plates, the floor is caked in mud  and the windows are dusty, but the air always fragrant with notes  of fresh lavender. Mornings are his favorite, he wakes up with the aroma  of coffee and the voice of his mother whispering sweet melodies. As he pads down the stairs from the bedroom he shares with his sister, he glimpses at her imposing and reassuring presence.

Without saying a word, smiling with her eyes, she winks at him, and by nodding briefly invites him to sit. In silence they remain, even when she pours milk into his bowl, sets the bread and butter on the table, takes a seat facing her little boy and watches him diligently buttering his piece of bread, which he dips into the milk and devours with the appetite of youth and hope.

On Saturdays, she stands back up and, with malice, opens the top cupboard, from where she takes a jar of jam and hands it to her son, eager and pleased. Her gestures are otherworldly, made of tenderness and grace.

While he plays his piece in front of his ecstatic family, only his mother’s eyes prevail. While he tries to anchor the memory of this moment deep into himself, he thinks of the mornings spent in the kitchen with her, recollecting each of her movements, the tone of her voice, the smell of her skin for these are the thoughts that he wishes to cherish forever when he will feel sad or affected by the adversity of life.

He remembers last week when he was playing outside with his friends, Tom and Lucas, and they left him to climb the tree even though they knew he would not know how to come back down on his own. While they ran away, leaving Hubert stunned and trembling, the image of his mother came to his mind and he instantly knew he would be fine.
Using the grip of his fingers and the strength of his legs, he steadily shuffled  down from the tree and after one last leap, landed on his feet, safe and sound.

He never regaled his mother about this incident. She would worry too much. Instead, he praises her daily, taking in all the confidence she radiates  and absorbing her values and tenacity. Today, joyful to celebrate the arrival of his newly brother, he glanced at his mother. He caught her eyes smiling at him, expressing her pride.
At this moment, little Hubert’s fingers played on their own, leaving his mind to wander his heart, causing tear drops to fill his eyes.