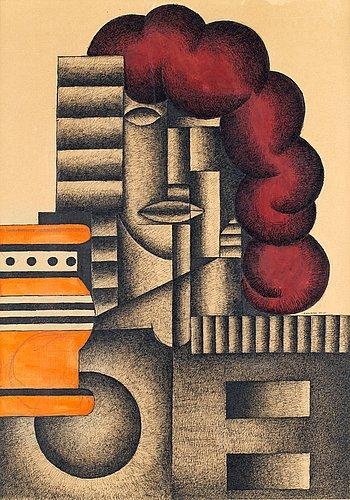 The dozens of scientists sitting in the same room are in awe. After all those longs years working on calculations they have reached a presence in the future. The room remains silent as no one had predicted this would happen and therefore no one prepared any questions. A man in a white shirt dares to ask: “What do you look like?” A hubbub diffuses rapidly, some scientists growl: “What an insignificant question!” while others, infuriated, acclaim “Really? What do you think she looks like?!”.

“I am made of the dark ashes which came out from your factories. My hair is red like the blood the brave soldiers you sent at the front, left behind in battle. I can only look downwards the same way you commanded your oppressed population to stare at the ground. I carry an orange jar filled with bitter water, the same water which covered entire continents in consequence of global warming. My mouth won’t open as I am forced to perceive all my data from within, therefore my communication is turned inwards. My intellect has been reduced and I have heard other men and women say that is due to the technology my ancestors forced upon us.”

Silence breaks into the room and everyone remains still for a moment. The woman doesn’t ask any questions nor speaks again. The hoard of scientists is left dazed and perplex. In a fraction of a second, they are forced to reflect on themselves and their current world. Millions of questions disperse in their minds, and millions of beats suddenly inhabit their hearts. They have just realized that it’s too late: stuck in between now and their future, how fast can this upcoming drama be diverted?