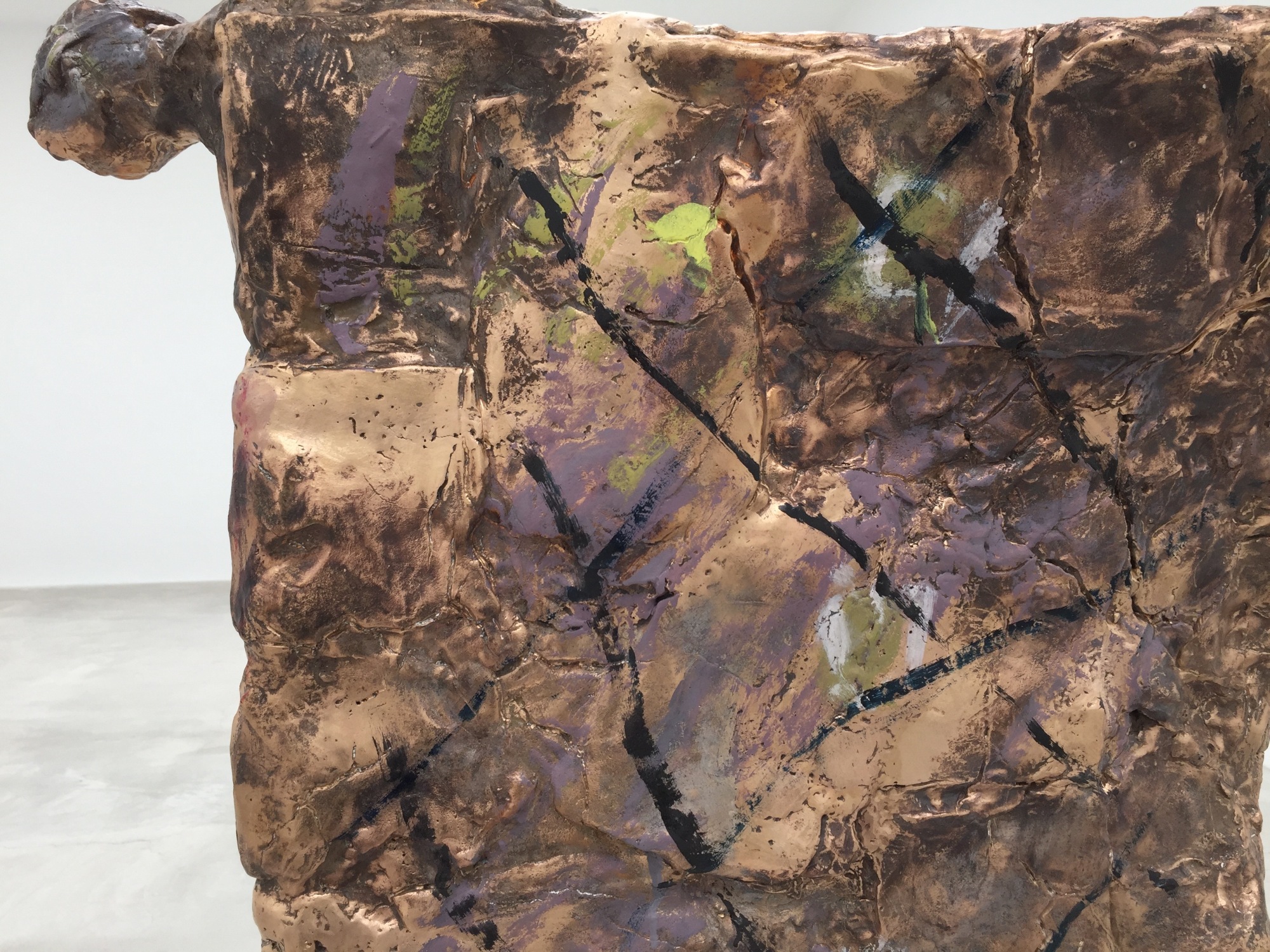 I take small steps in the Matthew Marks gallery surrounded by graceful dancers. The elongated silhouettes of British artist Rebecca Warren inhabit the space, creating an imaginary world where they twirl and swirl in unison. They are made of bronze and covered with a discreet layer of paint, which confer to the stern aspect of the metal a pinch of fantasy. They owe their willowy bust, arms and legs to the finesse of Giacometti’s sculptures, and the uneven surface of their skin to De Kooning’s abstract motifs. Warren treads in the footsteps of ancient masters, deliberately throwing raw and recognizable elements into her art. The pieces therefore appear to have been confectioned with a multitude of ideas, reworked, undone to be rebuilt, rather than created from a precise version. Seemingly, this characteristic is the signature feature of Warren’s work. She assembles, deconstructs, and re-organizes her work as if it were a never-ending project. In a world that craves polished images, clear and simple discourses, the artist gives us material with which to dig deeper, unsolved meanings, and an art which is filled with history and personal emotions.

Each of the totem-like bronze sculptures in the first room of the gallery is placed on a pedestal, enhancing the majestic poses of the possible human form the artist wanted to produce. Some of them have been hand painted with soft pastel colours and drawn on with a large black marker. Those are the ones to which I am attracted. Differentiable from the rest of the sculptures, they exude charm and charisma. Their movement in space seems to have been captured by Warren and reproduced exclusively for her viewers. One outsider makes its presence felt in the far left of the room. Made of geometric elements piled up one onto the other, the sculpture only resonates with the others thanks to its pastel pink shade. Compared to the previous sculptures I have described, it feels like an invasive element or the possibility of an escape from the twisted humanoid figures.

A few steps away, in another part of the Matthew Marks gallery, more sculptures await. This time, the room is inhabited by more of the same geometrical-type sculptures and only one of the previous long abstract ones. I feel like I am being forced to cooperate with the artist and investigate the boards of neon and pom-poms. The placement of the elements is harmonious, and so are the colours, still pastel and soft on the eyes. The existence of the pom-poms and the neon end up being annoying  by virtue of their perfect nature within each sculpture. These art pieces make me feel appreciative but one question springs to  mind: why are these details here? Without imperfection and strangeness wouldn’t we be inclined to not ask questions, reconsidering why a piece of art exists, and examining our position towards it? Warren suggests a dialectic: to connect physically and emotionally with the art, while stepping  away from it intellectually.