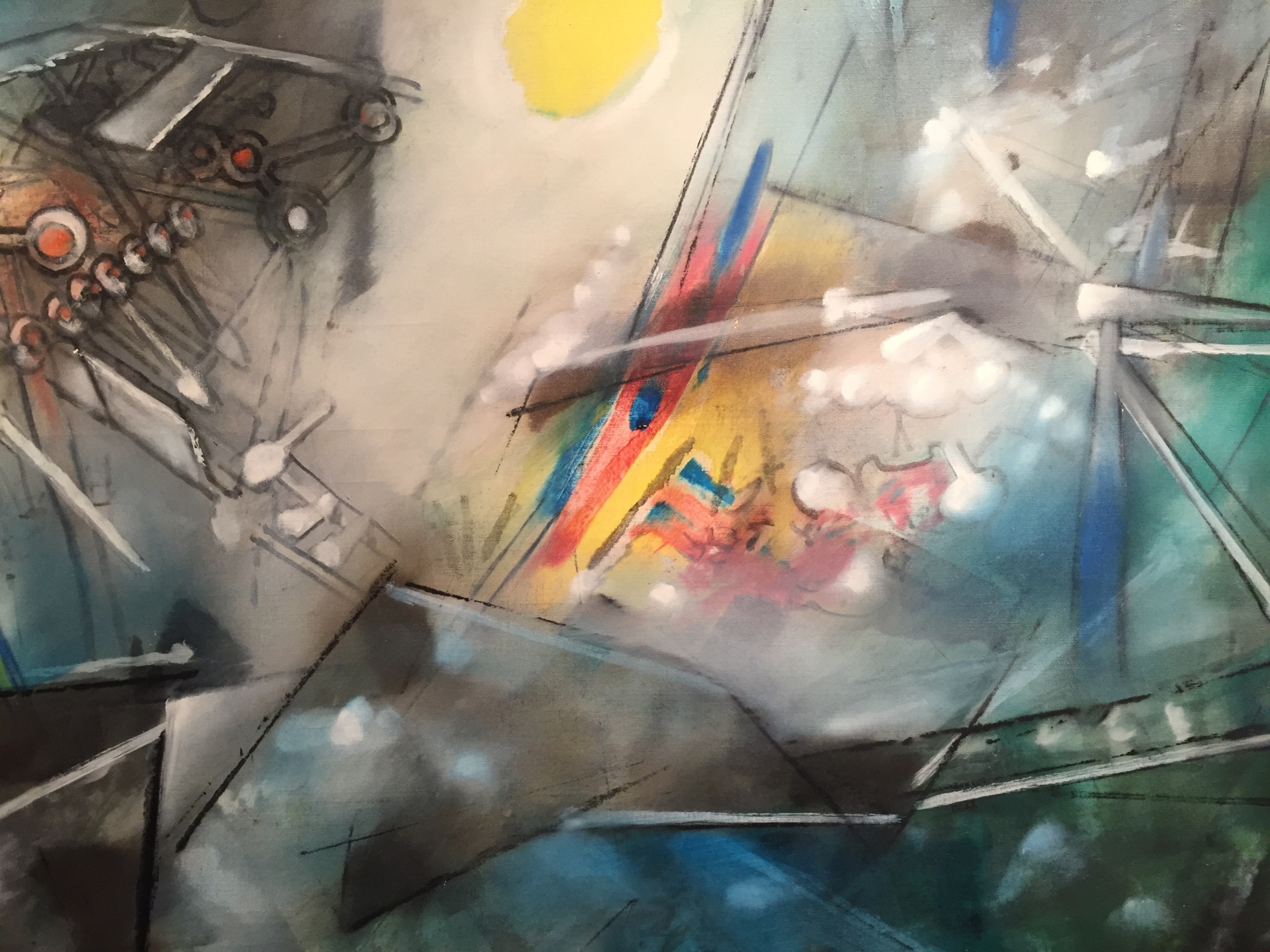 At the centre of the classical interior of the first floor of the Robilant + Voena gallery, Roberto Matta’s strong visual language imposes its heavenly colours and shapes.
The works, spanning from the 1940s to 1980s, created during the peak of surrealism, still grip the eyes and baffle the soul. Chilean artist Matta started off as a surrealist painter influenced by Salvador Dali and Andre Breton, and drifted to use the concept of automatic painting. The paintings displayed in the gallery are early works from the Psychological Morphologies series, in which Matta explored the existence of an alternative reality expressed with its own geometrical spatial codes.

The canvases are filled with shadows and clouds of grey immersed into rays of vibrant colours, such as yellows, blues, fuchsias, purples and greens. The elements trapped in disarray in the images snapshot by the painter seem to be in incessant motion, at times orbital like in “Inscape”, at other times forming a wave, like in “Mourir pour le pain”. The technique Matta used consisted of placing small quantities of bright colours next to each other along the blade of a palette knife and creating automatic gestures, leaving juxtaposed and mixed colours on the canvas.  If there are no clear signs as to what is depicted, the gestural process and the traces on the canvases act as the transmission of the agitation ruling the artist’s inner life.

As time went by, so did the hues and halos added onto the already blurred representations of Matta’s subconscious mind. He saw the world as non-linear and applied non-Euclidean geometry to an art he envisioned to be ephemeral. The renderings unveil complexity, playing with abstraction and figuration at once. The horrors of the war appear as menacing industrial machines, confronting themselves and exploding in the same frame. Committed to the same colour palette, Matta depicted  darkened shapes enhanced with bright tones celebrating the presence of survival hope in the war inspired landscapes. The artist’s later works from the 1960s involve Latin American political matters. “A Cena con Agatone” demonstrates the advancement in the representation of his content. Amorphic creatures in different positions henceforth occupy the canvas, and replace the geometrical contours and shapeless colourings.

The paintings resonate loud in the gallery. From a distance, bright colours stand out from the clouds, urging to speak in distress, before the darkness takes over and turns everything into ashes. Upon laying my eyes on the twirls of paint, depicting a world which seem to be constantly changing and evolving, it doesn’t take long to familiarize myself with the “writing” and decrypt the many feelings inscribed into the bursts of brushstrokes. It’s a complex art translating intense beauty and meaning, the beauty of a world seen from another perspective, the one of innocent intuition and real interpretation.