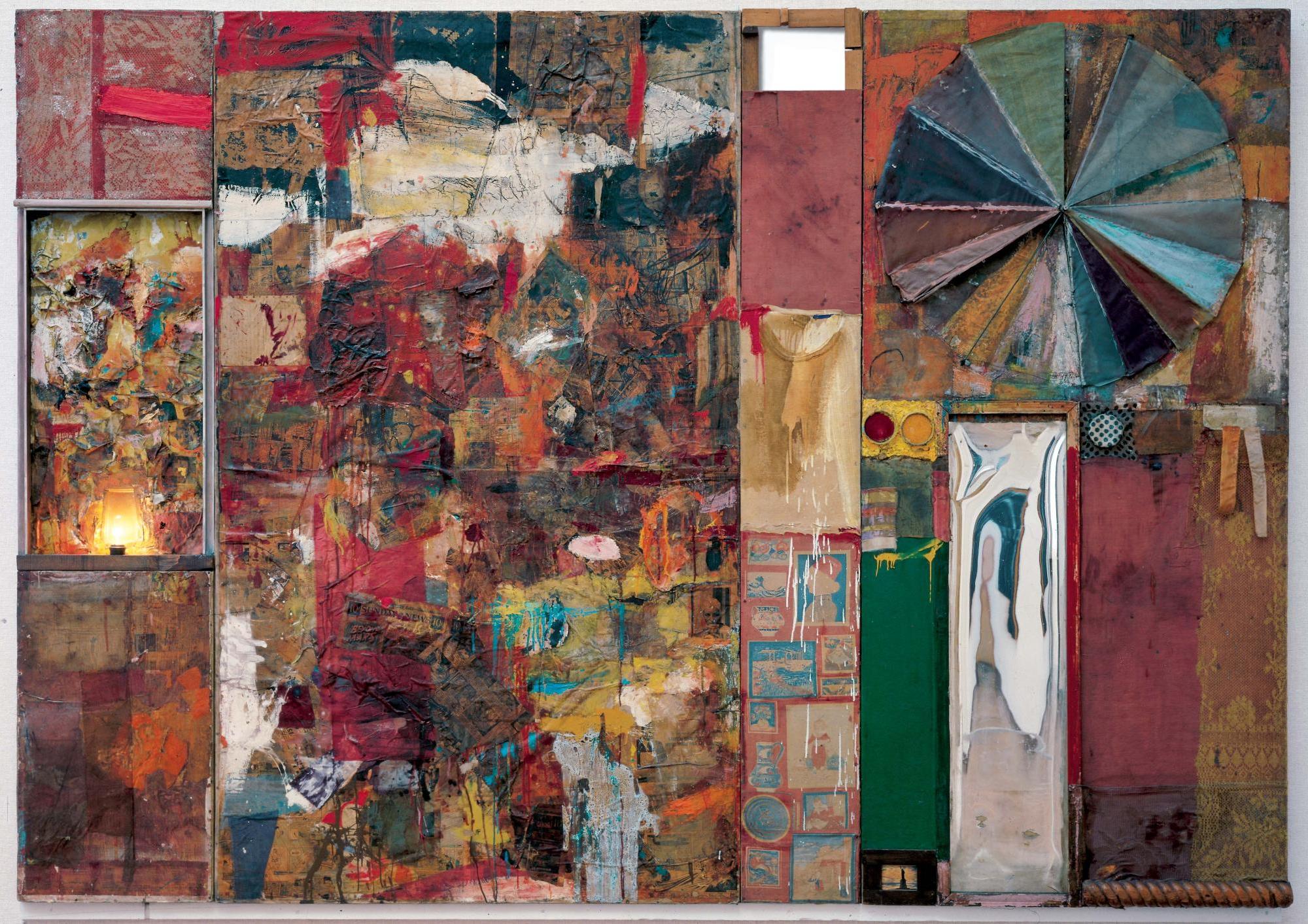 The retrospective celebrating Robert Rauschenberg is a large frame which can hardly contain all of the artist’s complex and innovative works.Initially working within the realms of abstract expressionism, he went on to explore not only different means of art, but he also revised how an artistic presence should be exploited in regards to the current social and political context. What is presented at Tate modern are concepts and ideas that were often misunderstood and foreseen as unconventional.

The chronological set-up of the artworks in the rooms and the amount of details in the artist’s work gives the impression of voyaging towards the many spheres which inhabit the creator’s mind. Driven by his travels, his relationships, and his artistic flair, the pieces always include new components that are selected and assembled under the glass display in the first room; wood and twigs brought back from trips to Italy and Morocco with friend Cy Tombly, set designs as seen in the video performances of Merce Cunningham and Trish Brown, silks from India arranged painstakingly on the wall, or innovative screen print collages which contain the premise of a travelling exhibition originally initiated after a trip to China.

Rauschenberg created art intentionally to dialogue with the viewers, utilizing whichever accessible and meaningful means he could to support his artistry. In Charlene, he produced colourful collages of found objects such as a stained white t-shirt, a light bulb, and an umbrella. He then pursued his experimentation in Combines and Bed, for which the props used seem to have been randomly picked but for which he might have been well aware of their symbolic meanings. First time painting was performed live in Paris, during which the back of the canvas was facing the public and the sound of the brushstrokes, accentuated by a microphone, was the only action the audience could appreciate. Through this process, Rauschenberg set the artwork into a different perspective, a first in the art world. In between abstract expressionism and pop art, the artist wasn’t the type to follow any rules and therefore could never be compartmentalized. When all eyes turn on Andy Warhol as the pioneer of pop art, it was actually Rauschenberg  who led the way.

The devotion to experimentation which culminates in Rauschenberg’s career is obvious throughout the exhibition. Not only did he work with a multitude of findings, he also approached other fields. This openness and thirst to explore originated from the education he received at the Black Mountain College in North Carolina, which he attended with Cunningham and John Cage. Rauschenberg was always looking from the outside-in and aimed to communicate with the masses.

He invented a new field where performance and art were no longer distinguishable. The different performances by the collective he founded, entitled ‘EAT’ (which stood for Experiment in Art and Technology), are projected onto the walls of the dimmed room ‘Live’. A tennis match with wired rackets and the ‘Pelican’ performance, featuring himself and dancing with Caroline Brown from the Cunningham company, demonstrated spectacular effects which he initiated and developed with professional engineers.

Until the end of his career, and his life for that matter, Rauschenberg worked on making art a multi-purposed means, of which no two individuals could interpret it in the same way. Aware of the influence of media and observing closely the reactions of the masses, he developed the screen prints in the last room as a final demonstration of his intuition to lay the future on canvases. The overlapping images point out the accuracy of Rauschenberg’s futuristic vision,  forecasting the shift of  society to function entirely within an image based culture.