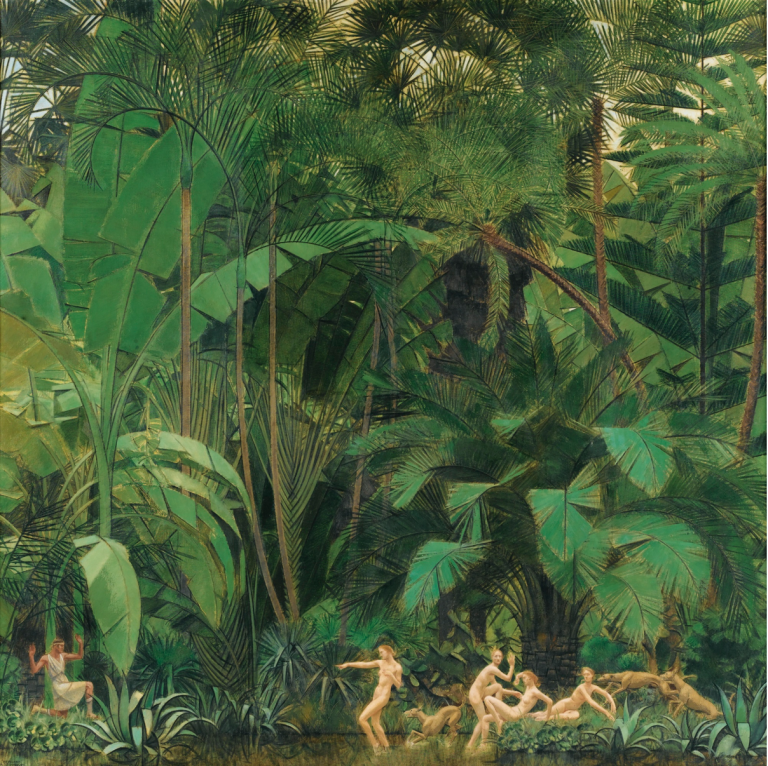 Gigantic green leaves are hiding the scene. We are privileged to be watching from far away without being seen. The landscape is dense and overwhelming. It’s green and fresh, reminiscent of a tropical feast. The trees are tall and give off a feeling of protection.

We are under the impression that we could be in the middle of a deep forest, bathing like these women in an oasis made out of clear iced water. The greenery overlooking the group is opulent yet extremely detailed. So is the naked queen and her nymphs. Their fine willowy silhouettes reflect the slender character of the flora.

We are witnessing the myth of Diana and Actaeon.
Actaeon has just been caught marveling at Diana’s beauty through the thin layers of a palm tree leaf. Diana probably didn’t even see him at first. She maybe only heard the rustling of the leaves dancing with the wind.
In a fury, she points at him and covers her breast. The three other women are trying to escape in fear and are trying to move away from the water without turning their backs to their Queen. Actaeon and Diana’s gestures are both graceful and elegant.
We know that later the hound will chase and murder Actaeon who will by then will have been transformed into a deer.

This painting is majestic and grandiose with a volume of details presented. There’s only one word to describe a green tone yet the artist uses an infinity of shades to depict this color. The representation of the individuals is so subtle and detailed, it almost fades in the decorum. We are immersed into a secret world guarded by a wild tropical garden. The leaves and trees participating in this scene seem to be as alive as the creatures they are covering.