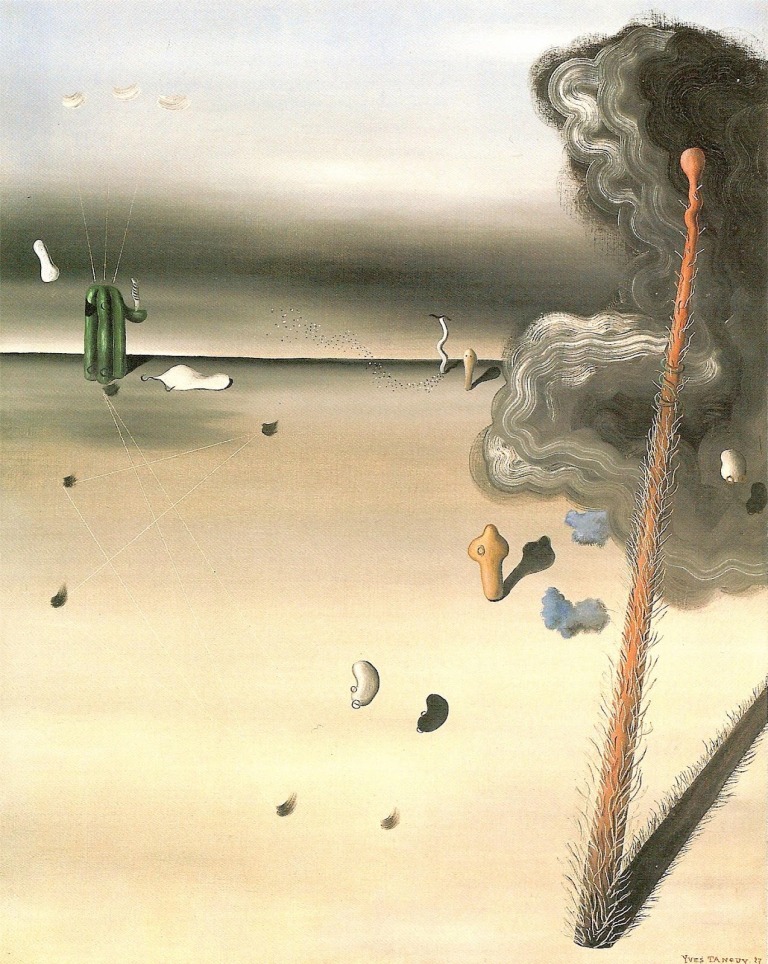 A dry wind blowing across a busy desert. Little characters are frolicking on the warm sand. Yves Tanguy’s surrealist decor is inviting us to take part into the amusing set-up, yet the bizarre unfamiliar shaped characters create an emotional barrier.

The distinct images are floating, minding their own business. We are looking for a connection. As we patiently wait for a revelation, a sign announcing we are able to reconnect the pieces of the jigsaw; we feel the heat, we are warm and we melt into the painting.

There’s nothing to understand and there’s no need to take any magical pill. All there is to do is dive into our imagination. Yves Tanguy is giving us the possibility to let go and create our reality, let’s take it.

In my reality, we are in the presence of the cycle of life. The large cloud on the right front layout is grey and hairy. It’s old and therefore needs a stick to walk around. It’s an adult because adults are larger than children. Several little bluish and grayish mini-clouds are frenzily twirling around the old cloud. That’s his name from now on. Perhaps they are from the same family. That would be nice.

As the eyes move towards the center of the painting, we come across several other rounded shapes. They are different species. But once again there’s always an adult watching over a younger version of itself. The light orange body with short arms and a circle on its right arm is certainly from the same species as the off-white bean shaped creature in front of him/her. That’s also the thing, there’s no gender in this world. There’s only old and young; and that’s already enough trouble.

Moving on to the far left plan of the action, there’s a cactus singing. He is one of the kind in the painting, meaning that he must be pretty special. He’s a he and again, if he has a gender then he must be rare and powerful. It’s the police! He is controlling the little comma shapes moving geometrically on the sand. Thanks to an ingenious laser program, the commas are watching the space and its surrounding. They are acting as surveillance, in case one of the children decides to run free from their parents, or guardians or family members. If we squint, we can identify 3 white baby beans being arrested by the cactus police.
Things are pretty square on this land. Maybe that’s due to the heat. Too much heat can increase emotions and anger. The inhabitants run the risk of becoming crazy.

So what happens to the beans that are not behaving? Apparently they are distorted and transformed into shapeless, deflated beans. They still get to keep their color though. Then they are sent to another world. Far away, a swarm of white beans are being sucked into a white zigzag pipe. They will get thrown into another level from the wavy black breach. Living their last moments, they are still watched over by an orange adult.

They were taken to a more peaceful environment, a place where they won’t be tempted to run from crazy. A cool scene, where the air is crisp and the breeze is fresh.